No. 3 seed Thomaston overcame a 10-point deficit to force OT, Abby Hurlbert made three straight free throws to send it a second OT, and the Bears went on to defeat No. 1 St. Paul-Bristol 61-57 for the Class S girls basketball title March 22 at Mohegan Sun Arena. It was one of eight finals covered LIVE by CPTV Sports and will be replayed several times in upcoming days (check broadcast schedule).

Thomaston freshman Casey Carangelo (21 points, nine rebounds) scored the first five points of the second overtime for Thomaston. That followed Hurlbert’s dramatic free throws after St. Paul took a 52-49 lead after Theresa Swanke made one of two free throws. Hurlbert (23 points, eight rebounds) was fouled shooting a three and made two free throws before St. Paul called time, then stepped up and hit the third. Read the game story by the Waterbury Republican-American’s Joe Palladino here. 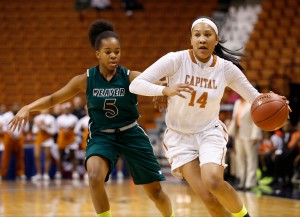 Unbeaten No. 1 Capital Prep overcame a sluggish start and defeated Hartford rival Weaver 69-53 for the CIAC Class L girls basketball title March 22 at Mohegan Sun. It was one of eight finals covered LIVE by CPTV Sports and will be replayed several times in upcoming days (check broadcast schedule).

Sophomore Desiree Elmore had 24 points and 17 rebounds to lead Capital, which trailed 33-30 at halftime. Teammate Kiah Gillespie had 17 points and 15 rebounds for Capital, which outrebounded Weaver 58-42 and had 29 second-chance points to Weaver’s nine. Read the game story from The Hartford Courant’s Lori Riley here.

For the third straight year, CPTV Sports proudly presented the CIAC boys and girls basketball championship games from Mohegan Sun Arena March 22 and 23, the first time we had eight games LIVE! It was a great weekend of basketball and we’ll replay all eight games Saturday March 29.

The final game of the weekend March 23 was dramatic all the way, with 15 lead changes. Windsor took the last one with 3:50 remaining and held on to beat Career-New Haven 63-59 in the boys Class L final. Guard Tyler Rowe had 25 points to lead Windsor, going 10-for-11 from the line. Saturday repeat: 9 p.m.

In Game 2 Sunday, favored Sacred Heart-Waterbury withstood Valley Regional’s first-half three-point barrage and rallied for a 65-56 victory in the boys Class S final. Malik Petteway had 17 points and 17 rounds to lead Sacred Heart, which was ranked No. 4 overall in the state going into the tournament.  No. 8 seed Valley Regional got 20 points from Christopher Jean-Pierre. David Bradbury had 14 points, 12 in the first half on four threes. Saturday repeat: 5 p.m.

In Game 1, New London won its first state girls basketball title, holding off a late Morgan run for a 57-52 victory in the girls Class M final. Charee Osborne had 16 points and 11 rebounds for the Whalers, who led by 14 at halftime before Morgan rallied to cut it to 53-52 with 2:06 to go. But the Whalers regrouped and held the Huskies scoreless the rest of the way. Saturday repeat: 9 p.m.

Saturday March 22 was an amazing day of basketball.

The nightcap was a memorable boys Class LL final. Bridgeport Central trailed by 18 halftime before unleashing a full-court press that forced 15 Fairfield Prep turnovers as the Hilltoppers stunned the No. 1 and previously unbeaten Jesuits 76-73.  Saturday repeat:  11 p.m.

The third game Saturday was a classic. No. 3 seed Thomaston overcame a 10-point deficit to force OT, Abby Hurlbert made three straight free throws to send it a second OT, and the Bears defeated No. 1 seed St. Paul 61-57 in the Class S girls final. Saturday repeat: 11 a.m.

In the first boys game of the day, Tyrell Arnum scored 26 points and Winston Morgan 21 to lead East Catholic-Manchester to an 87-60 win over Weaver in the Class M boys final. It was the Eagles’ first  title since 1972 and the first for coach Luke Reilly. Saturday repeat: 7 p.m.

In the first game Saturday, unbeaten No. 1 Capital Prep overcame a sluggish start and defeated Hartford rival Weaver 69-53 in the Class L girls final. It was the second straight title for the Trailblazers, who won Class S last year. Saturday repeat:1 p.m.

Desiree Elmore scored 27 points and teammate Kiah Gillespie added 19 to lead Capital Prep-Hartford to an 80-61 victory over Ledyard in the CIAC Class L girls basketball semifinals March 18 in Colchester. CPTV Sports was there and will show replays in upcoming days.

Top seed Capital Prep, last year’s Class S champion, will meet No. 3 Weaver  in an all-Hartford Class L final at Mohegan Sun Arena Saturday March 22 at 10:00am LIVE on CPTV Sports. Prep is 26-0 and has been the top-ranked team in the state throughout the season.  Ledyard finished 22-4.  Read the game story by The Hartford Courant’s Nick Greene here.

Carly Fabbri scored 21 points and Lauralton Hall-Milford pulled away in the second half for a 52-43 win over Mercy-Middletown in the semifinals of the CIAC Class LL girls basketball tournament March 14 in Wallingford. CPTV Sports was there and will show the replay several times in upcoming days leading into the Class LL final (check broadcast schedule).

Lauralton Hall will meet South Windsor, which defeated Westhill 59-40 in the other semi, in the Class LL final LIVE on CPTV Sports from Mohegan Sun Saturday March 22 at 6:00pm. The Crusaders ended Mercy’s four-year streak of reaching the state final, including Mercy’s memorable win over Lauralton last year seen on CPTV Sports.

Lauralton led 22-20 at half before taking charge with a 13-3 run in the third quarter. Read the game story from GameTimeCT.com’s Henry Chisholm here.

Win Tickets To The CIAC Basketball Finals!
Send Us Photos Of Your CPTV Sports Experience!

For the third straight year, CPTV Sports is proud to present the CIAC boys and girls basketball tournament championship games March 22 and 23 from Mohegan Sun Arena. This year, we’ll have all eight games LIVE!

We’re pumped — and we’ve got a contest to get you pumped for the finals! We’re giving away four sets of two prime tickets, two sets for Saturday and two for Sunday!

You must include the words “Run To The Sun” with your entry, which must be posted by 9:00pm March 19. Individuals are allowed an unlimited amount of entries. Winners will be selected that night at random and notified through the social media account they used to submit their photo (or contact information provided with mailed entries). Click here for a complete list of contest rules.

Weaver High jumped out to a 17-point third-quarter lead and held off E.O. Smith in the fourth for a 58-49 victory in the CCC girls basketball tournament championship game February 26 in New Britain. CPTV Sports showed the game LIVE and will replay it several times in upcoming days.

DeJane James led Weaver with 21 points; McKenna Dale had 17 for E.O. Smith, which trailed 40-23 before cutting the Beavers lead to 45-40. Weaver is the No. 3 seed in the CIAC Class L tournament, where unbeaten Hartford city rival Capital Prep is the top seed. E.O. Smith is the 10th seed in Class LL. Read the game story by The Hartford Courant’s Lori Riley here.

CPTV Sports will be following boys and girls postseason hoops the next few weeks, concluding with the state finals March 22-23 at the Mohegan Sun Arena.

CPTV Sports also covered the CCC semifinals February 24 and will replay them in upcoming days. Weaver, No. 6 in the GameTimeCT.com state coaches/media poll, defeated No. 8 South Windsor 65-51 in the first semifinal in the teams’ third meeting of the season. E.O. Smith upset tourney top seed Farmington, 59-55 in the second semi.

Cromwell recovered after squandering a 15-point halftime lead to defeat visiting Morgan-Clinton 49-47 Thursday in a matchup of the top teams in the Shoreline Conference and two of the best in CIAC Class M. CPTV Sports was there and will show replays in upcoming days (check broadcast schedule).

Morgan (14-2) outscored Cromwell 22-7 in the third quarter after the Panthers (15-1) took a 26-11 halftime lead. Cromwell’s Janelle Harrison, who will attend the University of Hartford, had 21 points, 11 in the fourth quarter. Read the game story by the Middletown Press’ Jimmy Zanor here.