The defending CIAC Class S-Small champions were left without a coach back on May 12th when Chris Fulton stepped down from the post that he had held since 2007. It did not take too long for Fulton’s replacement to be tabbed. Apparently, the new coach was selected some time back in June, but word of the new hire had not been made public, until now.

Jason Manson, 30, will be the second head football coach in the history of the Capital Preparatory Magnet School in Hartford when the Trail Blazers take the field this fall. Manson had previously coached the defensive backs and wide receivers for Fulton. He also served as a defensive coach at Central Connecticut State before he moved on to Hartford. He declined to make any formal announcement on taking the head coaching job  at CPMS in an effort to not take any attention away from his state champion players. 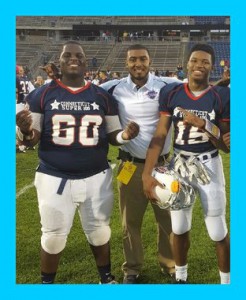 Manson (middle) looks to take Capital Prep to a second straight state title game in 2015, but will have to do it with a new quarterback.

“We have hired the right person to continue our drive for excellence, ” said Fulton. “I welcome Jason without reservation.”

Fulton resigned from his coaching post in May, but opted to stay on as the school’s athletic director. His decision was based on two factors: the opportunity for him to spend more time with his family and the pursuit of “social justice”.

Manson assumes the helm of a program that has captured the past four Constitution State Conference titles. The Blazers improved to 12-1 in 2014 after knocking off North Branford 20-13 in the CIAC Class S-Small championship game. It was a special year for Capital Prep under Chris Fulton as the team nabbed the first-ever state playoff victory for a CSC team a week before the final when the Blazers topped Canton 28-21.

Quarterback Rayshawn Phillips rushed for two touchdowns in the 2014 title game. He will be a senior this upcoming season, but not at Capital Prep. Phillips has transferred to Bloomfield; his third high school in four years (Prince Tech-Hartford). Kyle Zajack (CPMS ’18) and Dexter Lawson (CPMS ’17) were the only other athletes to attempt passed for the Trail Blazers last season, combining to go 3/5 for 21 yards.

Manson has a history of his own at Bloomfield, quarterbacking the Warhawks to three CIAC championships at the turn of the last century. He attended the University of Iowa. Manson’s first game as head coach will be on Saturday, September 12th at 2 p.m. when the Trail Blazers host Wolcott Tech-Torrington.