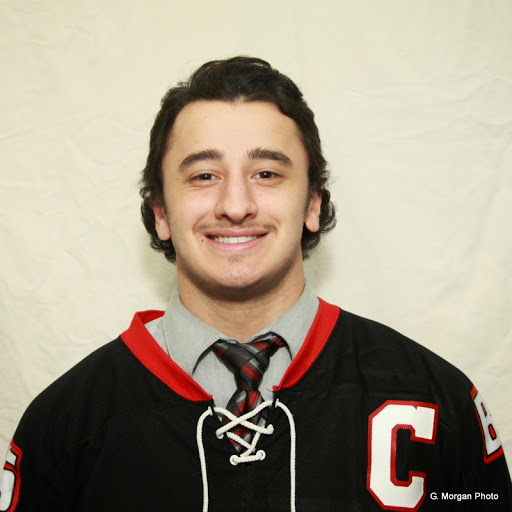 Tyler Criscuolo, a senior forward on Branford High’s boys hockey team, has been voted our UChoose Student-Athlete of the Winter for the 2014-15 season!

Tyler scored 30 goals with 18 assists this season for Branford (18-6-1), which advanced to the CIAC Division II semifinals before losing to eventual champion Suffield/Granby/Windsor Locks.

Tyler, also a standout baseball player, signed a letter of intent to play baseball at Southern Connecticut State in December.

Our UChoose Student-Athletes of the Week for winter 2014-15:

The WIRE - Relive the Championships, Spring Forward with UChoose and Game Coverage

#WIREWorthy Wednesday - Our spring season begins April 8th with the taping of Newtown/Staples baseball. For information on that game and more, visit cptvsports.org. You’ll find a schedule of our high school spring sports, along with our planned coverage for the New Britain Rock Cats!!!

Congratulations to our UChoose Student-Athlete of the Winter: Branford Ice Hockey star Tyler Criscuolo! Voting for the athlete of the week returns once spring games get underway (Sat. Apr. 11 poll opens) and will have a new deadline-Tuesdays at noon!

We’ll tell you which teams are on top of the final basketball media polls and let you know how you can find re-airs of this past weekend’s 11 championship games.

Capital Prep-Hartford took a 21-point lead into the second quarter and cruised to an 87-59 win over Northwest Catholic-West Hartford in the CIAC Class L girls basketball game played March 22 at Moehgan Sun and seen LIVE on CPTV Sports. The game will replayed several times in upcoming days (replay dates below).

Two-time state Gatorade Player of the Year Kiah Gillespie had 42 points and 22 rebounds in her final high school game before heading to the University of Maryland. Junior Desiree Elmore, who has committed to Syracuse, added 30 points and 17 rebounds.

Capital Prep (25-1) will finish the season as the state’s No. 1 ranked team in the state and is rated 17th in the nation by USA Today.

Northwest (19-7), which trailed 30-9 after the first quarter, got 15 points from Haley Connors. Read the game story from The Hartford Courant’s Lori Riley here.

Wilton (25-2) won its first tile and was dominant from the start, taking an 8-0 lead 90 seconds in. They led 26-15 after the first quarter, 45-25 at halftime and 61-34 going into the fourth quarter. The Warriors, considerably taller than the Bobcats, had a 54-28 rebounding advantage.

South Windsor (27-2) got 13 points from Amy McConnell as it lost in the final for the second year in a row and fourth time overall.

The Beavers (27-2) dominated the backboards as they erased a six-point third-quarter deficit. Weaver outrebounded ND-Fairfield 43-30 (17-6 on offense) and had 25 second-chance points to the Lancers’ six.

Chaylyn Martin added 11 points and 14 rebounds for Weaver, which won its eighth state title and first since 2007 after losing in the finals the previous two years.

Jordan Pettway had 17 points and Jake Heaton 15 for ND-Fairfield, which finished 21-7.

But St. Joseph closed it out at the free-throw line, where the Cadets outscored the Panthers, 21-8. Jacqueline Jozefick had 10 points (going 8-for-8 at the line) with 11 rebounds. Nicole Rojas had 13 points for Cromwell. Read the game story from the Connecticut Post’s Ryan Lacey here.

Shane Kertanis made 23 saves and Jake King and Jake Bourdeau scored twice to lead Suffield/Granby/Windsor Locks to a 4-1 victory over North Branford in the CIAC Division II boys hockey final March 21 at Ingalls Rink. CPTV Sports will be showing the game in upcoming days (replay dates below).

King, who scored with 5:24 remaining to give SWGL a 3-0 lead, added a empty-net goal after North Branford (17-7-1) pulled its goalie on a power play. Bourdeau scored the first goal with 2:40 left in the first period and again with 7:47 left in the third.

It was the first state final for North Branford, which got 28 saves from Will McEwen (28 saves). Read the game story from TheSportsDept.com’s Tim Jensen here.

Hurlbert, whose sister Abby made three consecutive free throws to give Thomaston the 2014 title, had a chance to clinch it with eight seconds left. But after missing two free throws, Hurlbert recovered to steal a pass from Canton’s Emily Briggs near midcourt. Hurlbert finished with seven points, four rebounds and three steals.

Briggs had 18 points and 10 rebounds to lead Canton (22-4). Maggie Treachy added 15 and Gabrielle Rose 11. The Warriors only shot 26.4 percent (17.2 percent in the first half), but stayed in it by forcing 29 Thomaston turnovers. Jacquie Grabowski led Canton with six steals; Briggs had four.

Jack Pardue scored unassisted 5:36 into the second period to give Darien a 1-0 victory over Greenwich in the CIAC Division I boys hockey championship game March 21 at Ingalls Rink in New Haven. CPTV Sports showed the game LIVE and will show replays in upcoming days (check broadcast schedule).

Will Massie had 23 saves for Darien (21-1-2), which won its first state title since 1969 and a year after falling to Fairfield Prep 2-1 in the Division I final