College hockey returns to CPTV Sports Sunday Dec. 28 with the championship game of the 2014 Frozen Holiday Classic LIVE on-air and online from the Webster Bank Arena in Bridgeport.

“College hockey, especially in the state of Connecticut, has truly grown by leaps and bounds over the past few years,” Harbor Yard president Howard Saffan said last April when the event was announced. “The Frozen Hockey Classic will unify these outstanding schools that play college hockey in our area, and we’re happy to support and facilitate such an opportunity.”

Next year, 2013 NCAA champion Yale will join the two other Connecticut teams in the second Frozen Classic.

“We’re excited to be a part of the ever-growing landscape of college hockey in the state of Connecticut and feel that this event will contribute to its growth exponentially,” Saffan said. “As you can tell, we are bullish on Connecticut hockey.”

Cavanaugh recounted his interview with UConn athletic director Warde Manuel before he was hired to coach the Huskies in May 2013. “This state is starved for UConn hockey,” Cavanaugh told Manuel. “I really, really believe that.”

On Nov. 5, the Huskies captured their biggest win in program history in a 1-0 shutout of No. 3 Boston College before 8,089 at a raucous XL Center.

Wednesday night, Cavanaugh recounted his interview with UConn athletic director Warde Manuel before he was hired to coach the Huskies in May 2013. “This state is starved for UConn hockey,” Cavanaugh told Manuel. “I really, really believe that.” 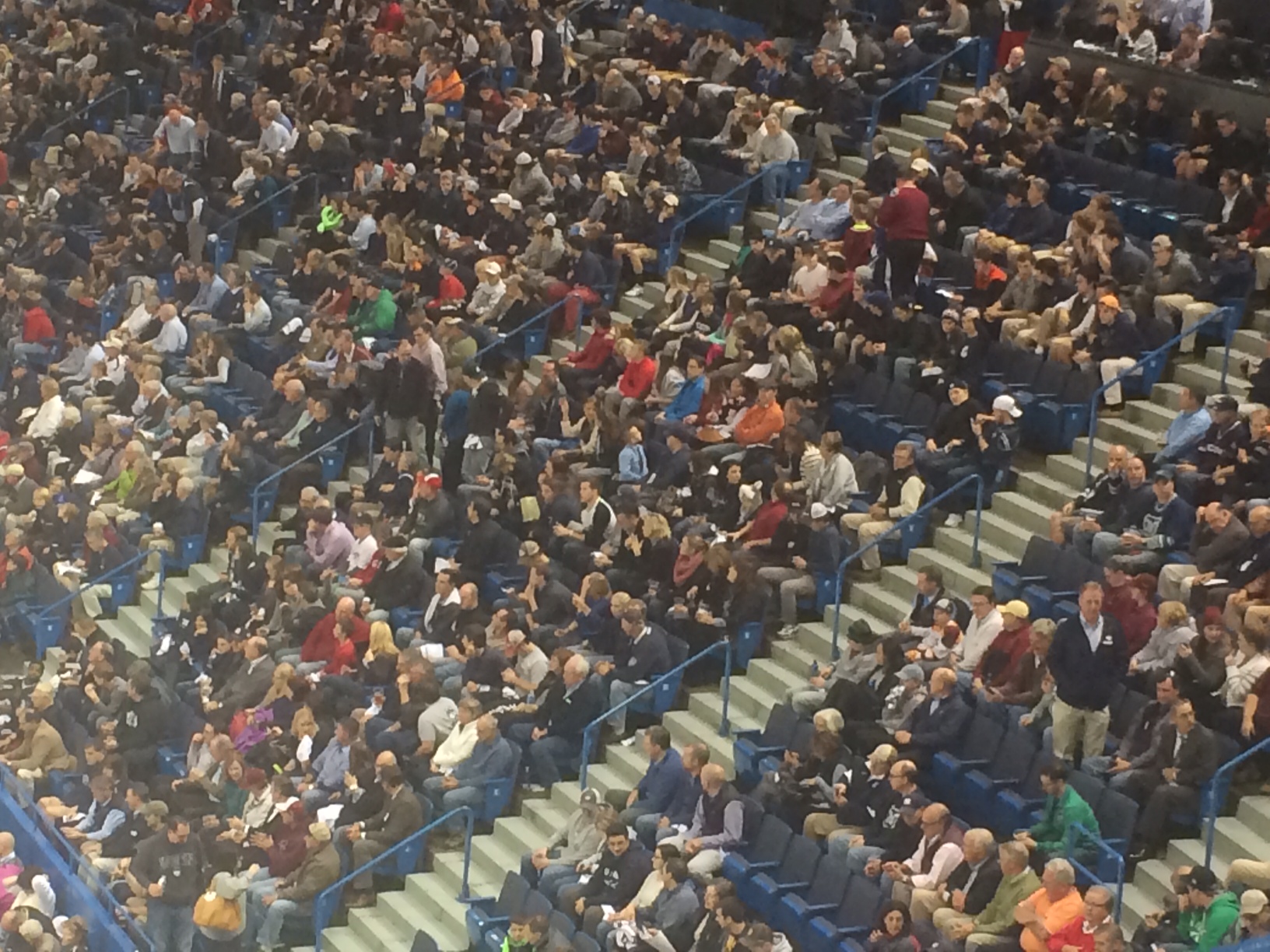 Wednesday, the Huskies captured their biggest win in program history in a 1-0 shutout of No. 3 Boston College before 8,089 at a raucous XL Center.

Evan Richardson’s power-play goal 11:35 into the first period stood up thanks to 35 saves from UConn goalie Rob Nichols. “I just got the puck on net,” Richardson said of his second goal this season. “That’s what we’ve been working on in the power play is getting pucks on net.” 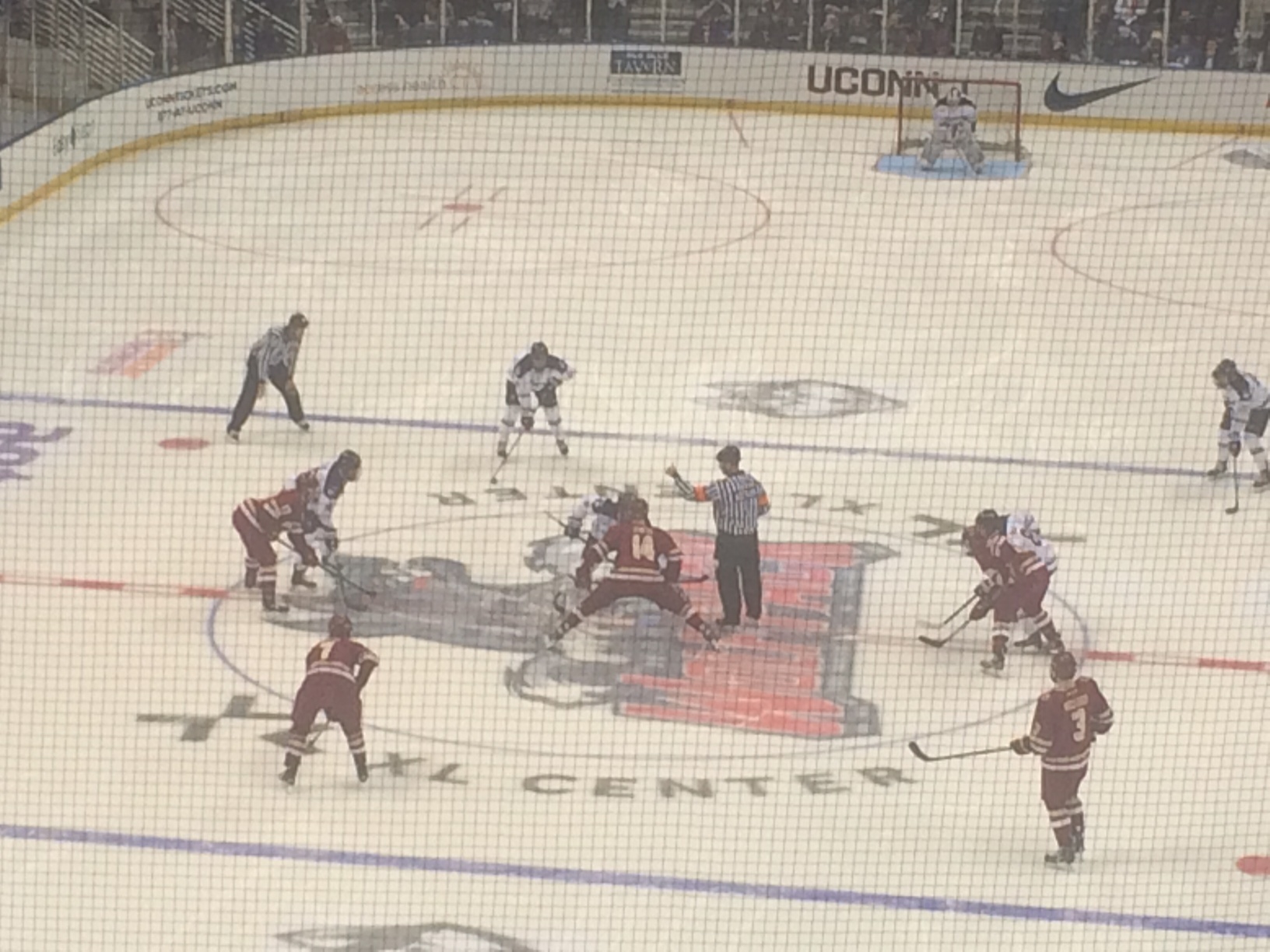 The opening faceoff at 7:10 p.m. came after a ceremonial puck drop that included Manuel, UConn president Susan Herbst and Hockey Hall of Famer Brian Leetch, who grew up in Cheshire and attended Avon Old Farms before going on to star in the NHL.

It was clear it would be a historic night for hockey in Hartford, though Richardson kept his focus on the task at hand. “We try to play the game not the occasion,” he said.

Said Cavanaugh: “When I walked on the bench and saw the maroon and gold, I was like that’s weird . . . because you’re only human. I was there for 18 years and it was the first time I was coaching against them.”

He served under York as BC won four national titles, six Hockey East regular season titles and nine confernce tournament titles. They briefly exchanged pleasantries after the game, but Cavanaugh admitted that they barely had a chance to speak.

“He was the guy that gave me my first job,” said Cavanaugh, who played at Bowdoin and was hired by York before the 1992-93 season, York’s last at Bowling Green before moving to BC.

UConn dominated the first period, outshooting Boston College, 13-9. Eagles goalie Thatcher Demko made two big saves in one sequence against the Huskies’ Patrick Kirtland early in the first period, as the crowd roared in anticipation of a Huskies score.

“Thatcher continues to be one of the dominant goaltenders in the nation,” York said. “(Thatcher) again played very, very well tonight, but we’re having trouble generating offense.”

Demko (21 saves) had to be stellar because the Eagles could not convert their chances. BC outshot UConn in the second period, 16-6. Nichols stopped all those opportunities, eliciting monster cheers with every big save. The Eagles outshot UConn 35-22, but went 0-for-5 on the power play. 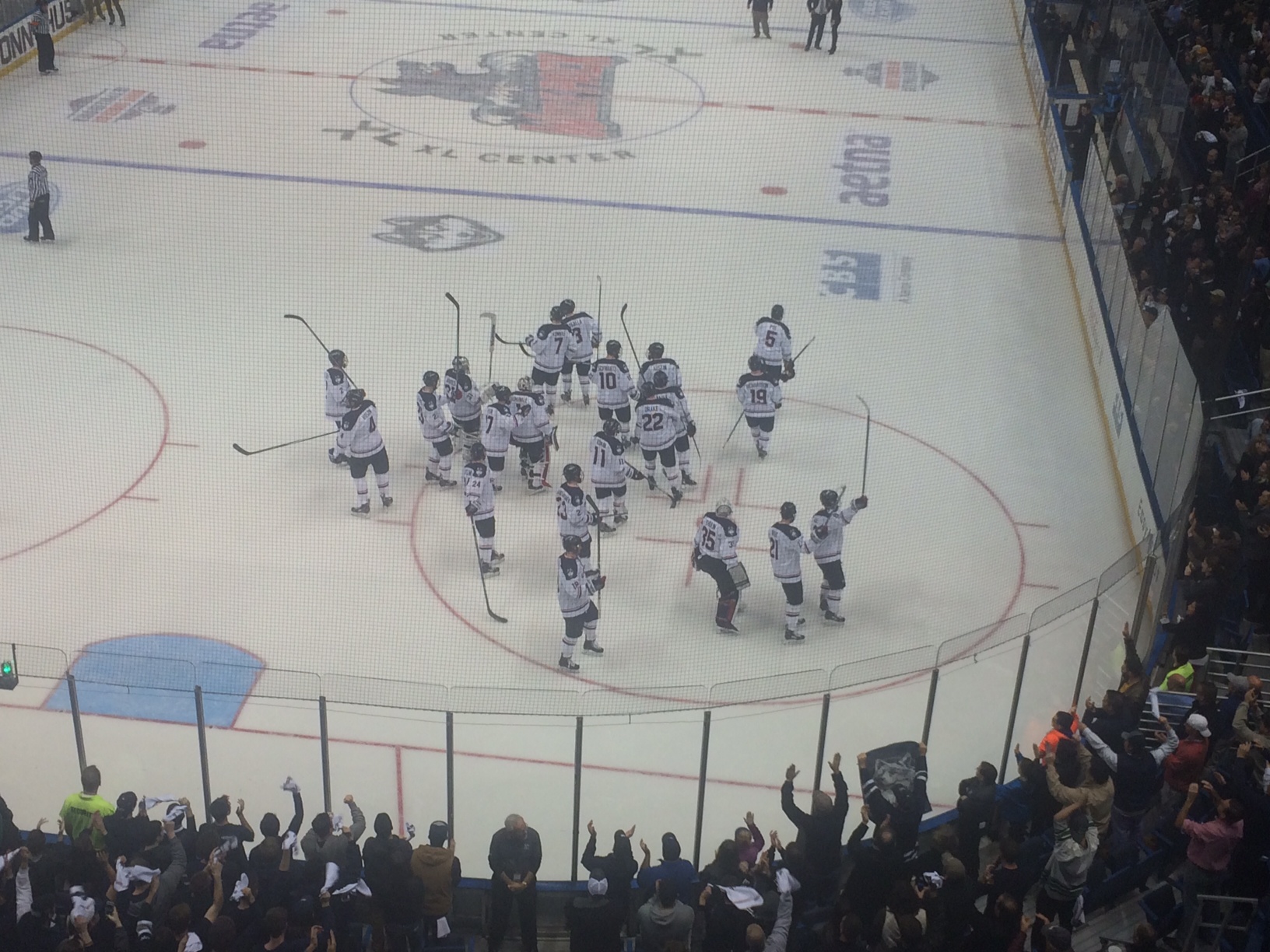 York was most troubled by one BC failure to convert. “A key part of the game was a 5-on-3 in the third period,” a frustrated York said. “We just never got that sustained offense that we like to get on a 5-on-3.”

There will be moments UConn fans won’t forget as the Huskies marched toward victory in the third period — the standing ovation Nichols received after his 31st save at 12:44 in the third period, Darude’s ‘Sandstorm’ reverberating through the XL Center speakers during a timeout at 16:22, the “Let’s go Huskies” chant after a flurry of saves by Nichols with 15 seconds left, and finally, the loud roar as the puck trickled toward BC’s end as time expired.

“There wasn’t any doubt in my mind or the players’ mind that we were going to get it done there,” Nichols said.

Cavanaugh was still coming down from a gigantic high after the game. But for him, it is only a stepping stone to what he believes will be bigger moments in the future for UConn hockey.

Goalie Michael Garteig made 33 saves and No. 4 Quinnipiac scored two goals in 17 seconds in the second period as the Bobcats defeated neighborhood rival Yale 4-0 February 14 in New Haven in a game seen LIVE on CPTV Sports. The ‘War on Whitney’ will be repeated several times in upcoming days (check broadcast schedule).

Quinnipiac, which defeated Yale three times last season before losing to the Bulldogs in the NCAA Division I championship game, improved to 21-5-5, 10-3-3 ECAC. No. 13 Yale, which failed to capitalize on five power plays, dropped to 12-8-4, 7-7-3.

Cory Hibbeler opened the scoring in the first period for Quinnipiac. The Bobcats then struck in quick succession in the second period. After Sam Anas scored at the 7:33 mark, Connor Clifton — who scored in Quinnipiac’s 3-3 home tie with the Bulldogs in November — followed up 17 seconds later. Quinnipiac is second and Yale sixth in the ECAC standings. Read the game story by the New Haven Register’s Chip Malafronte here.