UChoose Student-Athlete of the Week

Fans - UCHOOSE! Vote online each week for your favorite Connecticut student-athlete. Winners are posted on CPTVSports.org each Monday afternoon. Follow us on Twitter or join us on Facebook to be notified when voting begins.

CPTV Sports editors select nominees for merit (based on each week's performance as completed by 8 p.m. Saturday.) Fan input is encouraged, and nominations submitted via social media will be considered.

• Ricardo Lopez – Maloney-Meriden boys soccer
Ricardo,  a  senior, scored then had an assist on the game-winner  to give the Spartans a 2-1 victory over RHAM-Hebron in the CCC tournament championship game seen on CPTV Sports.

•  Caroline Losure  – Nonnewaug-Woodbury girls volleyball
Caroline a junior, had 19 kills and 16 digs to help the Chiefs win their first Berkshire League title with a 3-1 victory over top-seeded Terryville.

• Jared Grant – Cromwell boys soccer
Jared, a junior, scored the game-winner with a header in overtime to give the Panthers a 2-1 win over Old Lyme in the Shoreline Conference championship game. 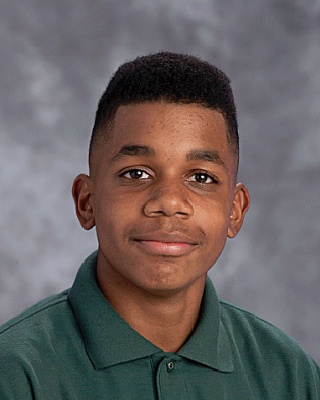 Quarterback Rafael Lebron of Cheney Tech-Manchester has been voted our fall Week 6 UChoose Student-Athlete of the Week!

Rafael, a junior, was 12-for-16 passing for 337 yards and five touchdowns and ran for a score in Cheney Tech’s 55-36 win over visiting O’Brien Tech in a CSC game football game Friday.

Cheney Tech improved to 6-1, is a half-game behind CSC leader Capital Prep-Hartford and is No. 8 the CIAC Class M ratings.

Click here on our guidelines for the award, which is determined in an online vote starting Saturday night and ending Monday at noon. Be on the lookout for our Week 7 nominees starting Nov. 1!

This week’s nominees for CPTVSports UChoose Student-Athlete of the Week (starting Monday Nov. 10 and ending Saturday Nov. 15). Voting ends Monday at noon, so choose your favorite now and tell your friends and fellow fans to vote, too!

• Freddy Clark  – Glastonbury boys soccer
Freddy, a sophomore, scored 1:02 into the second overtime as Glastonbury rallied for a 2-1 victory over Farmington in the Class LL final.

• Paige Davis– Immaculate-Danbury girls soccer
Paige, a senior midfielder, scored two second-half goals to lead Immaculate over Avon in the Class L final, the Mustangs’ 10th state title in the past 13 years. She is playing in the High School All-American Game Dec. 13 in Raleigh, N.C., and has committed to the College of Charleston (S.C.)

• Vincent Gambino  – Wolcott football
Vincent was 19-for-24 passing for 413 yards and six touchdowns in 59-27 win over Derby. Wolcott (7-2) is sixth in the Class M playoff point standings.

• Delano Robinson  – Northwest Catholic football
Senior ran 30 times for 303 yards and three touchowns to lead Northwest (9-1) to a 30-22 victory over Platt-Meriden in CPTV Sports’ LIVE Friday game of the week.  Northwest is second in the Class S playoff point standings.

• Isabelle Taylor – Darien girls volleyball
Isabelle, an outside hitter, had 22 kills and was named the Class LL tournament’s most outstanding player as the Blue Wave ended Cheshire’s 51-match winning streak in the final. Darien now has a state-record 17 girls volleyball titles.

• Kyle Trusch  - Somers boys soccer
Kyle, a senior, stopped two Cromwell attempts in a penalty-kick shootout in the Class S semifinals, then followed with a shutout of East Hampton in the championship game. The Spartans and Bellringers played to a scoreless tie and were declared co-champions per CIAC rule.

Mark Piccirillo of Shelton High has been voted our fall Week 6 UChoose Student-Athlete of the Week!

After the game, he spoke to GameTimeCT.com’s Mike Pucci about his performance . . .

“We played like we always do. We did what we do week in and week out. We are taking it one game at a time. Coming in, we didn’t want this to be an upset game after last week.

We practiced hard and we wanted to be as crisp as we could be. It feels great to be playing meaningful games again. It is not just for the team, but everyone here as well. That is important to us.”

“He has been playing that way all year. He is a three-year starting quarterback and he sees the field.”

Congrats to Mark, who joins Fairfield Warde soccer player Taylor Gabrenas, Cheshire girls volleyball player Jillian Haberli and Torrington boys soccer player Kevin Vaca as our UChoose honorees this fall. Click here on our guidelines for the award, which is determined in an online vote.

Kevin Vaca of Torrington High has been voted our fall Week 5 UChoose Student-Athlete of the Week!

Vaca’s goal on a free kick in the second overtime gave the Red Raiders a 1-1 tie with unbeaten Naugatuck in an NVL game Oct. 8 seen on CPTV Sports (YouTube highlight above at the :39 mark).

Vaca tied the score for Torrington, which was playing with 10 men after a Red Raider was red-carded. A description of Vaca’s kick from the game story by the Torrington Register-Citizen’s Peter Wallace. . .

Kevin Vaca, Torrington’s superb center midfielder, led Raider charges throughout the second half, trying to reach the Greyhound penalty box before he was knocked to the ground – a chance at a penalty kick.

“It was hands down, the most competitive game of the season,” grinned (Torrington goalie Nate) Manchester. “Kevin Vaca is a legend.”

Two minutes earlier, a Greyhound got the final yellow card. This time, it was a free kick from the top of the keeper’s box.

Vaca lined up his shot, sailing it into the upper right corner of the net, as unstoppable as (the goal by Naugatuck’s Dan Martin) was just minutes before.

Congrats to Kevin, who joins Fairfield Warde soccer player Taylor Gabrenas and Cheshire girls volleyball player Jillian Haberli as our UChoose honorees this fall. Click here on our guidelines for the award, which is determined in an online vote.

Nominees for the weekly UChoose Student-Athlete of the Week award are selected by CPTVSports on merit based on performances completed by 8 p.m. Saturday.

Fan input is appreciated and encouraged and nomination submitted via social media will be considered. Each nominee will receive a
separate post on CPTV Sports social media announcing their nomination.

Coaches and athletic directors will be notified by CPTV Sports of pending nominations to allow for rejection of participation.

Fan votes determine the winner. The voting ends Monday at
noon. The winner’s school will be contacted to receive right of
publication. The winner will be announced at cptvsports.org Monday afternoon.

The nominees are in and now you can vote for our UChoose Student-Athlete of the Week! Voting ends Monday Oct. 14 at noon. 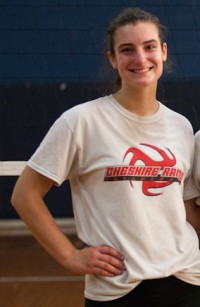 Cheshire High’s Jillian Haberli, a senior outside hitter for the Rams’ girls volleyball team, has been voted our fall Week 4 #UChoose High School Athlete of the Week!

Jillian had 17 kills and 15 digs to lead unbeaten Cheshire to a 3-0 victory over Mercy-Middletown in an SCC match televised by CPTV Sports.

Fairfield Warde girls soccer forward Taylor Gabrenas was our fall Week 3 award winner. Taylor, a junior (far right in photo), scored the winning goal with three minutes left in a 1-0 FCIAC win over New Canaan Sept. 26. The Mustangs are one of the top teams this season in the FCIAC and CIAC Class LL.

Congrats to all athletes nominated for the award and thanks to all voters! Vote each week at cptvsports.org and on Facebook.