CPTV Sports’ one-hour special featuring expert analysis and player and coach interviews to get you ready for the 2014 CIAC High School Football Championships — inlcuding our coverage of six of the eight finals — premiered Dec. 9 and is now online (above)!

We’ll kick off our LIVE coverage Friday Dec. 12 at 6:30pm when Brookfield meets Berlin for the Class M-Large title at New Britain’s Veterans Stadium. The next day, we’re back at Willow Brook Park for three more LIVE games: 10am: Class S-Large-Ansonia vs. Valley Regional; 2pm: Class M-Small-Ledyard vs. St. Joseph’s; 6pm: Class LL-Large: Southington-Norwich Free Academy.
We’ll also do live look-ins for the two games at Central Connecticut’s Arute Field: 10:30am: Class S-Small: North Branford vs. Capital Prep: 2:30pm (those games will be shown in full on a replay basis — schedule below). 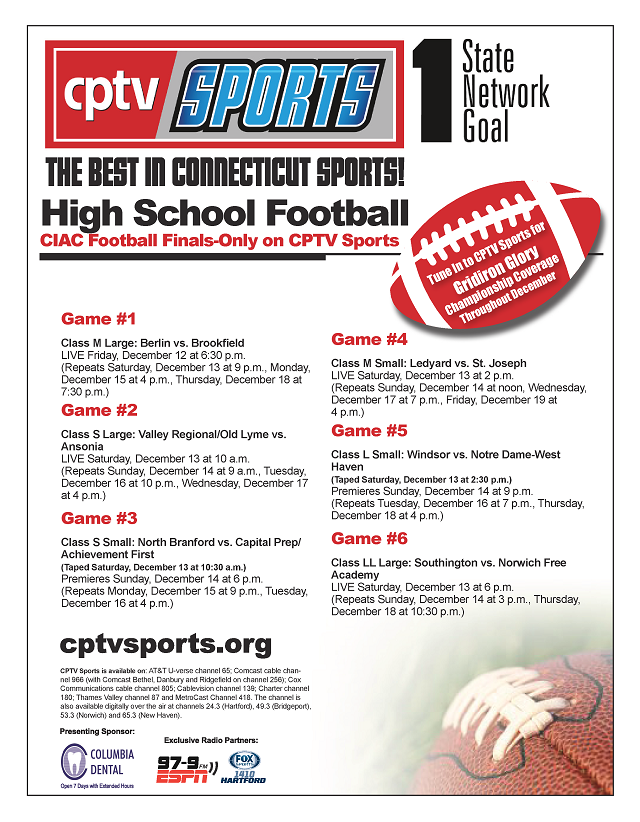 Congrats to our UChoose Student-Athlete of the Week: Andrew Tuscano, Valley Regional football

Andrew Tuscano, a senior running back from Valley Regional High in Deep River, has been voted our 10th UChoose Student-Athlete of the Week of the fall!

Andrew ran for 173 yards, including touchdowns of 74 and 50 yards, went 42 yards on a screen pass for another score, and had an interception in Valley’s 34-0 rout of Bullard-Havens Tech of Bridgeport Dec. 6 in the CIAC Class S-Large semifinals.

From the Valley-Bullard-Havens game story by the New London Day’s Gavin Keefe:

Caked in mud and sporting a bloody nose, senior Andrew Tuscano looked like he had taken a beating.

Just the opposite was true.

Tuscano and his Valley Regional/Old Lyme teammates handed out the punishment in Saturday’s CIAC Class S-Large semifinal football game against fourth-seeded Bullard-Havens.The top-seeded Warriors rolled to a 34-0 victory and advanced to their first state championship (game). . .

“We knew we had to get here,” Tuscano said of reaching the state championship. “At the beginning of the season, this was definitely what we wanted to do. … It’s just something that we haven’t been able to reach. We’ve been trying so hard for the past few years.
“Now to just get here, it’s just so great.”. . .

On the first play of the second half, Tuscano bolted around the left side and raced down the sideline for a 74-yard score. . . . On Tuscano’s first carry after his big run, he found daylight again, going 50 yards for a touchdown to increase the lead to 21-0.

“In the second half, it just started rolling for us and we just kept the momentum going,” Tuscano said.

Click here on our guidelines for the award, which is determined in an online vote starting Sunday and ending Tuesday at noon. Be on the lookout for our CIAC football championship weeekend nominees Dec. 14!

CPTV Sports was your home for the 2014 CIAC Football Championship games played Dec. 12-13!   We’ll review the big weekend with our Championship Rewind show LIVE from our Hartford studios Monday Dec. 15 at 8:00pm.

Middletown’s Dario Highsmith: The Sky Is The Limit

The Middletown quarterback won the 2013 Gatorade Player of the Year award — but he barely plays that position! Find out what it’s like to be on the cusp of being an NCAA Division I athlete in this week’s Best In Connecticut Sports Spotlight.

New Canaan will meet FCIAC rival Darien for the Class L-Large title Dec. 13 at 10:30am at West Haven High. It will be the second meeting in three weeks for the rivals — Darien defeated New Canaan 28-21 in overtime in the FCIAC championship game Nov. 27.

New Canaan handed Wethersfield its first loss in 19 games. The Eagles scored cut a 21-0 half deficit to 21-14 in the third quarter on a 52-yard run by Eric Lamore and a 16-yard pass from Matt Sanzaro to Kyle Klavins.

LaPolice, who caught a 2-yard touchdown pass in the first half, responded with his 95-yard TD run. He finished with 141 rushing yards. 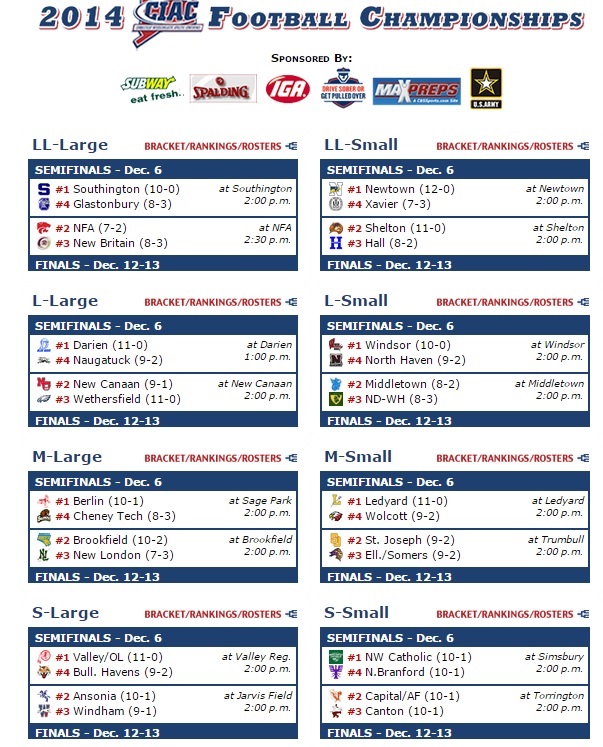 The game (on-air only, no live streaming) is among 16 CIAC semifinals being played in eight classes Dec. 6 and the only one matching teams in the GameTimeCT.com state top 10 media poll.

CCC Division II West champion Wethersfield (11-0) and ranked eighth in the poll. No. 5 New Canaan (9-1) is coming off a 28-21 overtime loss to rival Darien in the conference championship game Nov. 27 (Stamford Advocate game story here), is fifth. More on the matchup from the CIAC here.

CPTV Sports will provide comprehensive coverage of CIAC football championship weekend Dec. 12-13, starting with LIVE coverage of the lone game being played Friday night. Seven finals will be played the next day — check back at cptvsports.org and our Twitter and Facebook pages for our coverage plans for that day.

Below is WFSB-TV video from Wethersfield’s 37-0 win over Fermi-Enfield earlier in the season and New Canaan’s loss to Darien.

NFA, which led 13-3 at halftime, outscored the Whalers 50-37 in a wild second half. NFA (7-2), which won the ECC Large Division title and earned a semifinal berth in the Class LL-Large tournament against New Britain, ran for 319 yards and five touchdowns on 12 plays in 8:48 of the third quarter, according to the New London Day’s Ned Griffen.

New London (7-3) advanced to the Class M-Large tournament and will face Brookfield in the first round.

Congrats to our UChoose Student-Athlete of the Week:
Jawaun Johnson, Norwich Free Academy 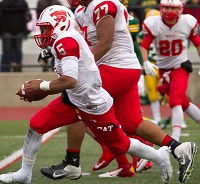 Jawaun Johnson, a sophomore quarterback, from Norwich Free Academy, has been voted our ninth UChoose Student-Athlete of the Week of the fall!

Jawaun ran for 303 yards and seven touchdowns as NFA outscored New London 63-40 Thanksgiving Day in a game seen LIVE on CPTV Sports — our #UChoose game chosen in a statewide vote of fans (highlights above). The victory gave NFA (7-2) the ECC Large Division title and a berth in the Class LL-Large state tournament. The Wildcats will host New Britain Saturday Dec. at 2:30pm.

From the NFA-New London game story by the Norwich Bulletin’s Owen Poole:

[NFA coach Jemal] Davis was intrigued by Johnson as a freshman, so much so that the coach elected for spring football, something NFA hasn’t done in the past, to get him as many reps as possible.

“We saw glimpses of greatness, really,” Davis said. “He would do some things out there and (the coaches) would just be like, ‘Wow.’ As he began to learn the signals and concepts which we run our run game from, we knew we he was going to be very talented. We threw it all at him and the whole rationale was he’s going to have three years to get it. If he messes up some, so be it. He’s actually picked it up much better than I thought he would.”

Once again, CPTV Sports will be your home for LIVE coverage of the CIAC football playoffs!

This year, the CIAC is crowning eight champions before it transitions back to a four-division format in 2015. We’ll be LIVE for one semifinal game to be announced Saturday Dec. 6 and will be at selected finals Friday Dec. 12 and Saturday Dec. 13.

Check back at CPTVSports.org for our football postseason coverage plans!

For more information on the 2014 CIAC football tournaments, go to ciacsports.com.

Thursday’s contest will determine the ECC Large champion; New London is playing for Class M playoff berth. Last year, New London won 9-7.  NFA has a 75-62-11 lead in the all-time series, which began in 1875. The teams played on CPTV Sports in 2012, with NFA winning 28-7.