Congrats to our UChoose Student-Athlete of the Week:
John Nolan, Windsor quarterback 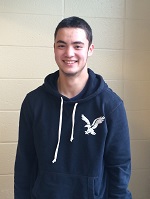 John Nolan, a senior quarterback from Windsor High, has been voted our 11th UChoose Student-Athlete of the Week of the fall!

John (6-foot-4, 195 pounds) was 9-for-15 passing for 165 yards and three touchdowns in Windsor’s 38-16 win over Notre Dame-West Haven in the CIAC Class L-Small championship game Dec. 13 at Central Connecticut’s Arute Field as the Warriors completed a 12-0 season. Tyler Coyle, who also returned a fumble 89 yards for a touchdown, had TD catches of 20 and 18 yards and Courtney Rush had one TD catch for 67 yards.

Click here on our guidelines for the award, which is determined in an online vote starting Sunday and ending Tuesday at noon. Be on the lookout for our first nominees of the 2014-15 winter sports season Dec. 21!