Installing a New Program in Canton…

Chris Currier is 37 years old. He comes from Montville and currently resides in Colchester. He has two kids and a mane of facial hair that has been touched by hues of grey. He wears a gold chain adorned with a maroon “Tomahawk” that appears to be a nod to the colors worn by his new team, but swears that it is a coincidence as it is a salute to his Native American heritage. 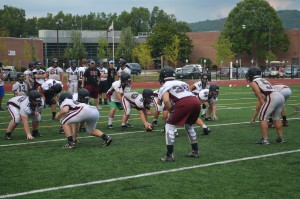 The Warriors are off and running toward a goal of getting back to the playoffs. They have a whole new team and organizational philosophy.

“Coach Philippon left for whatever reasons that he did, but I still think that there is a lot of talent here and it just needs to be developed properly,” reputed Currier. “I’m a young enough coach to where I want to do that and I want to have the time to do that. I want to develop these guys into being great football players.”

Currier was selected by a search committee in Canton this past June to succeed Philippon as head coach. The former coach left in December after the team had made the CIAC playoffs and finished the regular season 10-1. The team graduated 9 all-conference players. Philippon told the Collinsville Press that he did all the could to bring more kids into the program, but left due to the fact that 18 kids were returning and he had no idea if his staff could wrangle in more.

Senior fullback and inside linebacker Matt Bangs was a part of the search committee that chose to hire Currier.

“I think he knows what he’s doing,” articulated Bangs. “He’s established great relationships with the players. He’s very personal and personable. He can connect with players.”

Matt’s 65 tackles on defense in 2014 are the most of any returning player. The team lost three running backs that each rushed for at least 950 yards, so the senior captain, along with Eddie Melton will try to fill-in for a group that accounted for 300 yards rushing per game last year.

It is clearly a team that will change its ways from a year ago. Currier will institute the “Pistol Offense” in 2015, a style of play used to mask play selection for a rush-heavy, but not exactly passing-ignorant team. Coach wants to utilize his team speed to run 65% of the time and dictate possession, but he also wants his quarterback to throw the ball because “passing is a part of the game.”

“My philosophy is a little bit different than coach Phillipon’s was,” challenged Currier. “With low numbers, we condition a lot because we have to. It’s really just getting kids to buy into the program, because that’s what it is now, a program.”

“Compared to last year, it’s a whole new thing to us,” exclaimed Bangs. “This year: sprints before lifting, sprints after lifting. Endurance drills. Running up the field and down the field. Everything you can think of, we are doing it.” 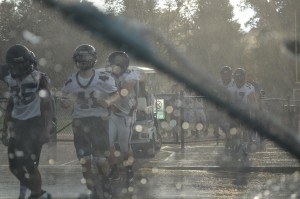 We saw rain for the first time on the #TrainingCampTour forcing us to leave practice, but we got what we needed at Canton practice!

In other words, Currier knows he may not have a lot of football players, but he has some athletes and will take a classic approach to give his kids an opportunity to play. He has teamed with athletic director Craig DeAngelis to create a junior varsity team, three years after a lack of organizational depth forced the school to ditch the program. Currier has 38 kids on his roster, but does not want the young kids to play for the sake of filling out a roster sheet. Those guys will play on the JV team and watch the varsity kids go at it.

Guys like the team’s true leader, quarterback Alex Higley, will show the youngsters how it’s done so that Canton’s future will be a successful one. He is one of three captains, but I have got to say after watching him command the huddle, that he is the unquestioned leader. I was also pleasantly surprised at how quick he has picked up this pistol offense, especially when you consider the fact that coach was hired less more than three months ago! He rolled out well and demonstrated a quick, accurate ball. 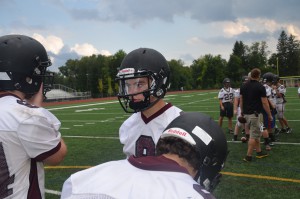 Alex Higley has been cleared to throw the ball a year after completing seven passes in 2014 in just 17 attempts.

Higley told me what he did for the team last year. “Really just led the team down the field,” explained Higley. “Not much throwing, it was run-first, smash-mouth football. This year is a whole lot different and I’ve got a whole new role. We are throwing it more than last year.”

Higley attempted just 17 passes a year ago on a team that threw the ball 40 times for 302 yards. But there are realities associated with having a low rate of participation. Higley, one of the team’s finest athletes, will not play very much on defense because he has just one freshman behind him on the depth chart.

It is refreshing to know that Currier will be protecting his quarterback’s health, while ensuring that his young back-up can develop on the junior varsity team.

“Our freshman players will not just be tackling dummies.”

That message was brought to you by a coach who seems to know what he is doing as he jump-starts a program less than three months after taking the job. His team seems to be buying in as well…

Follow the #TrainingCampTour as it happens on Twitter. Please check in to cptvsports.org nightly for other team training camp recaps. For more on the Canton team, tune in to the 2015 High School Football Training Camp special on September 4, 2015. See Canton battle Coginchaug Regional on CPTV Sports, Tuesday, October 27 at 9 p.m.