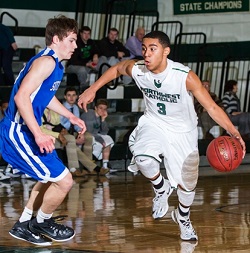 Christian Thomas, a senior guard and captain of Northwest Catholic-West Hartford’s boys basketball team, is our fifth UChoose Student-Athlete of the Week of the winter and 16th of the 2014-15 school year!

Christian scored a career-high 38 points in Northwest’s 71-64 victory over Simsbury Jan. 14, a game that drew nationwide attention for the buzzer-beater by Simsbury’s Luke Gorkofsky to force overtime. Northwest is 5-4, 4-2 in the CCC West.

Click here on our guidelines for the award, which is determined in an online vote starting Sunday and ending Monday at noon. Be on the lookout for our next nominees of the 2014-15 winter sports season Saturday Jan. 24!