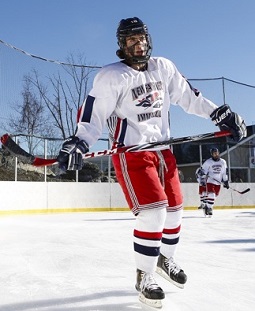 Peter Masi, a junior defenseman on New Fairfield/Immaculate’s boys hockey team, is our seventh UChoose Student-Athlete of the Week of the winter and 18th of the 2014-15 school year!

Peter had a hat trick in NFI’s 6-1 victory over Joel Barlow-Redding Jan. 29. He followed up with two assists the next day in a 3-0 win over Shepaug/Litchfield/Nonnewaug. He has eight goals and nine assists this season for NFI (9-5), the third-rated team in CIAC Division III.

Click here on our guidelines for the award, which is determined in an online vote starting Sunday and ending Monday at noon. Be on the lookout for our next nominees of the 2014-15 winter sports season Saturday Feb. 6!