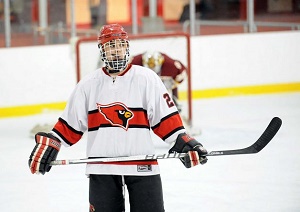 Matt Lodato, a senior forward on No. 1 Greenwich’s boys hockey team, is our ninth UChoose Student-Athlete of the Week of the winter and 19th of the 2014-15 school year!

Matt scored two key goals for the Cardinals last week. He scored the game-winning goal in overtime (his second score of the game) to give Greenwich a 4-3 win over Notre Dame-West Haven Feb. 12. Two days later, the Cardinals’ captain scored the game-tying goal as Greenwich and New Canaan skated to a 2-2 tie. Greenwich is 14-1-2 overall, 7-0-2 in the FCIAC.

Lodato’s overtime goal came after he helped Greenwich kill a five-minute major penalty after Notre Dame-West Haven rallied from a two-goal deficit to tie the score. From the game story of The Greenwich Time’s Scott Ericson:

In OT, Greenwich’s Matt Lodato — who was on the ice for much of the major penalty kill — got loose in front of the net before sending a screaming shot past the goalie’s glove side, giving his team the win.

“We were really fired up after we killed that one off,” Lodato said. “It’s a penalty we really didn’t need, but we just had to kill it off and bounce back. I just had a lot of time in front and I saw the lower right side open and I just hit it.”

Lodato scored twice for Greenwich, also connecting on a power play goal in the second period, giving Greenwich the lead heading into the third.

Click here on our guidelines for the award, which is determined in an online vote starting Sunday and ending Monday at noon. Be on the lookout for our next nominees of the 2014-15 winter sports season Saturday Feb. 20!